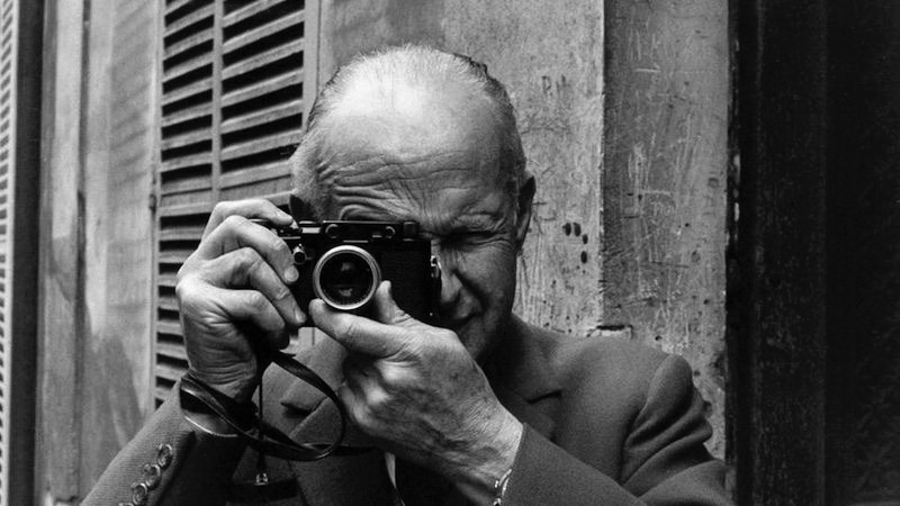 Should I bin my SLR and buy a Mirrorless Camera?

This is a question that has been on my mind for some time. I’ve read countless articles, and had conversations into the early hours, consuming copious glasses of a certain clear beverage, with nice tonic and botanicals obviously, in order to find the answer. But does the advancement of mirrorless camera technology signal the death of the single-lens reflex (SLR) camera?

The start of the camera revolution: the rangefinder

Henri Cartier-Bresson was perhaps the great humanist photographer of the 20th century. The camera he used almost exclusively throughout his career was a Leica M3 Rangefinder. He framed his shots amazingly with a 50mm F1.2 Noctilux lens.

The history of the rangefinder is a digression, but a fascinating one. In the 20s photojournalists like Cartier-Bresson needed a faster, more nimble camera. Military technology was adapted by camera manufacturers. Using a scope that measured distance on the battlefield by a trick of optical triangulation coupled with a lens focusing ring: the rangefinder camera was designed. It was lightweight, silent and unobtrusive.

In a rangefinder, the image is seen through a viewfinder. But the new functionality to view and focus the image through the attached lens made the SLR stand out.

The switch to SLR

Although the Single Lens Reflex concept was invented years back in the late 1800s. It wasn’t until the 40’s that Duflex, Contax developed the 35mm SLR. The Japanese Asahi Optical company launched the Asahiflex in 1952. It still needed work.

In 1957 they launched the Asahi Pentax, named after the pentaprism viewfinder. This was a gamechanger and influenced the design of future SLRs worldwide. The Pentax became so popular that Asahi changed their company name to Pentax Corporation. Ever since SLRs have dominated the market.

How digital tech changed the market

Despite our shift to digital, SLRs continue to be the primary choice for professional photographers. The switch from film to digital was a staggering technological advancement that had massive repercussions. Initially, there was a slow adoption, then along came the Canon 5D. This changed everything.

Adaptation was the order of the day not just for photographers but labs whose film processing revenue dropped off a cliff. Computer sales soared, photographers had to become computer technicians and filmmakers now had a camera that could create a movie for a fraction of the cost it would have been before.

The advantages of digital technology to the photographer are now well and truly entrenched. Film is still shot and loved in a similar way vinyl is to the audio world. But digital capture makes up the vast majority of commercial and amateur photography.

Why mirrorless cameras then…?

The amateur market went for mirrorless tech, with point and shoot cameras, in a big way. Cheap to make and lightweight. The technology in the mirrorless ‘point and shoots’ was clunky though. The EVF viewfinders were awful not to mention the iso capabilities and so on.

Meanwhile, the professional DSLRs, particularly from Cannon and Nikon, were leading the way in technological advancements’ and really responding to the demands of serious professionals. There was a big divide between what could be produced from expensive professional cameras and lenses versus affordable and portable ‘point and shoots’.

Two things happened in 2012 that signalled everything was about to change. Sony produced the a7II. Full frame, mirrorless and 24 megapixels (mgpxl). More compact and cheaper than any full-frame sensor DSLR.

Apple produced the iPhone 5. The camera on this phone was great as a point and shoot, but they added in panorama mode that produced seamlessly stitched photographs at up to 28 megapixels. I will point out that this is the only mention of phone cameras in this article. It does however illustrate how electronic brands see mirrorless camera technology, not just as an add on but a major tool in communication devices.

The level of R&D in this area has allowed manufacturers like Sony to push the boundaries and produce new, better models of cameras prolifically.

2017 was the beginning of the end for the DSLR. Sony produced the Alpha-9. With a battery grip, this looked and felt like a DSLR. But it offered 693 autofocus points and 20 frame-per-second shooting. The Nikon D810 still had the largest sensor on any full-frame ‘35mm’ DSLR camera at that point. Sony responded in 2018 with the mirrorless A7III. A 42 mgpxl, full-frame sensor.

The Japanese newspaper Nikkei, the world’s largest financial newspaper by circulation, published an article about Sony’s first decade in the mirrorless market and current trends in the camera industry.

Found within the report is a breakdown of camera shipments by the big Japanese brands in 2019, which offers an interesting look at where things stood last year.

Of the 8.66 million interchangeable lens cameras shipped last year, here’s the number shipped out by each company:

Today, we have new updated models of mirrorless camera from the big 4 Japanese brands Sony, Canon, Nikon and Fujifilm. Even Nikon has responded to the competition and listened to the demands of professionals by releasing the Z6II and Z7II. Both, in my opinion, fantastic. But I’m biased as I love Nikon glass and love that familiar label in my camera bag.

Coming back full circle, like those unobtrusive rangefinders, we now have smaller, lighter, faster cameras which allow the photographer to achieve pictures that they thought were never possible.

Manufacturers are improving the autofocus capabilities on mirrorless cameras at an exponential rate. The burst rate on these cameras has become so fast that the Sony a9II is almost running at the same frame rate as a movie camera. This is a total game-changer in sports photography.

So should I bin my SLR?

This comes to my question, should I bin my SLR? Should I move completely to mirrorless or sideways to a beautiful, expensive European rangefinder?  The truth is it comes down to personal preference, especially with the rangefinder, which has its limitations. Mirrorless systems have adapters that allow the glass from the SLR system to be used, therefore allowing manufacturers to help secure their customer base.

There is no doubt that manufactures will slow down production of pro DSLRs. This year, on July 18th, Pentax, released a statement saying they would not be producing a pro mirrorless camera. They are right! There is no advantage to them.

The likelihood of Pentax becoming a major alternative to the big 4 is extremely unlikely. But they do have very loyal customers. And their lenses, from 1975 right up to now, still use the same lens mount. Apart from the 645Z medium-format beast, they are sticking with DSLR manufacturing

The benefit, or novelty, of seeing through a DSLR viewfinder might become a niche and maybe persuade some, longing to hear the sound of the mirror and shutter’s whizzing cycle interrupting press calls and tense sporting moments, to move back or even hold on to their old faithful DSLR.

With all the advancements in camera technology providing incredible speed in order to cater to clients ever-increasing demands, it’s easy to forget why we are photographers in the first place. Sometimes slowing down and following the ethos of the great Cartier Bresson isn’t such a bad thing.

As the great man said, “Your eye must see a composition or an expression that life itself offers you, and you must know with intuition when to click the camera”. Spraying shots sometimes is needed but stopping to consider before shooting is paramount.

Mirrorless systems allow both. I’m in!

Why Clients are Turning to Smaller, More Specialist Agencies For Big Projects